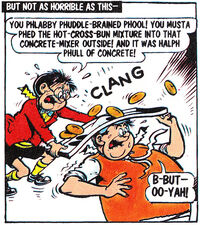 "Big Head and Thick Head" was a strip that ran in The Dandy. It first appeared in 1963 and was originally drawn by Ken Reid;[1] Frank McDiarmid later took over.[2]

The strip told the age-old story of the conflict between a clever but arrogant fellow and a well-meaning idiot.

Retrieved from "https://ukcomics.fandom.com/wiki/Big_Head_and_Thick_Head?oldid=9726"
Community content is available under CC-BY-SA unless otherwise noted.