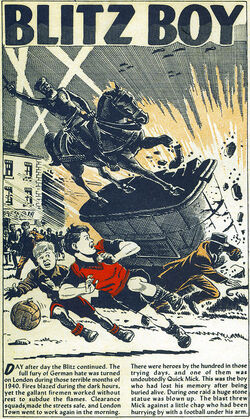 "Blitz Boy" is a strip that ran in The Dandy, drawn by Paddy Brennan.

Set in 1940, it told the story a London boy named Quick Mick who'd lost his memory after being buried alive during the Blitz. Eventually, he was reunited with his parents, a pair of wealthy department store owners.

Retrieved from "https://ukcomics.fandom.com/wiki/Blitz_Boy?oldid=10917"
Community content is available under CC-BY-SA unless otherwise noted.