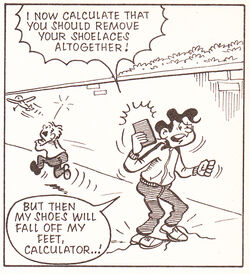 "Calculator Kid" was a strip that ran in Cheeky Weekly from July 1978 to February 1980 before moving to Whoopee!. It was drawn by Terry Bave.

It was originally conceived as a strip about a boy and his radio; Fleetway's Group Editor Bob Paynter suggested that the strip instead showcase that quintessential seventies piece of kit: a pocket calculator.[1]

The strip starred Charlie Counter, a boy with a talking calculator named Calc. The general formula was that Calc would make various seemingly nonsensical suggestions which would always turn out for the best - for example, throwing a pie into a man's face, causing him to chase Charlie and thereby avoid a car that was about to hit him.