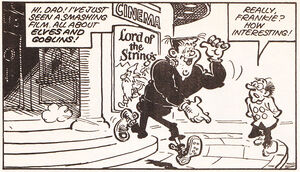 "Frankie Stein" was a comic strip that first appeared in Wham! in 1964. It was revived in 1973 for the first issue of Shiver and Shake; this incarnation later moved to Whoopee!, and Frankie was so popular that he received his own annuals and holiday specials, and was also used as the editor character in Monster Fun. The strip was originally drawn by Ken Reid; Robert Nixon later took over, and Brian Walker has also drawn the character.[1]

Frankie was, obviously, a parody of Frankenstein's monster (as portrayed by Boris Karloff); he was characterised as a big lug who was clumsy but never meant any harm. He was created by Professor Cube, and although Frankie loved his maker, the professor very much regretted building him in the first place.