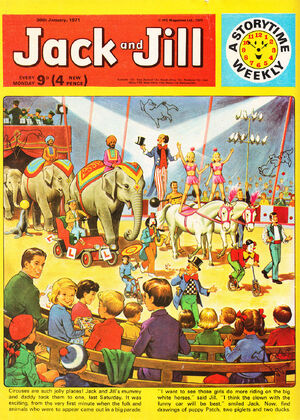 Jack and Jill was a British children's comic published by the Amalgamated Press, Fleetway and IPC between 27 February 1954 and 29 June 1985, a run of approximately 1,640 issues. "Jack and Jill of Buttercup Farm" was the cover strip for many years, originally drawn by Hugh McNeill and later by Antonio Lupatelli. The stories were told in rhyming couplets, although by the end of the 1970s the stories were written in normal prose form. Others were told in captions below the illustrations, a style of storytelling common to pre-war nursery comics such as Puck and The Rainbow.

Retrieved from "https://ukcomics.fandom.com/wiki/Jack_and_Jill?oldid=12116"
Community content is available under CC-BY-SA unless otherwise noted.