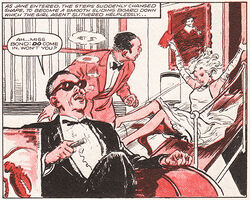 "Jane Bond: Secret Agent" is a strip that ran in Tina and Princess Tina in 1967-70, drawn by Mike Hubbard, and later appeared in the 1979 Tammy Annual.

Like Robina Hood in Bunty and Jill Crusoe in School Friend, Jane was a female counterpart of a well-known male protagonist: in this case, James Bond. Sent by the World Police Force ("Worldpol" for short) to deal with a criminal mastermind named Leopold (alias the Lobster), Jane made use of a parachute hidden in a handbag, exploding jewelry and a lipstick radio as she tangled with her opponent. Leopold had some tricks up his sleeve himself, most memorably a giant mechanical lobster.

Perhaps we were meant to infer that Jane was a relative of her more famous namesake - but as the strip was not authorised by the estate of Ian Fleming, no specific connections were mentioned.