UK Comics Wiki
Register
Don't have an account?
Sign In
Advertisement
in: Creators B, Writer-artists, Artists,
and 4 more

Leo Baxendale (b. Preston, Lancashire, 27 October 1930) is the creator of numerous characters in children's humour comics, including "Minnie the Minx" and "The Bash Street Kids" for The Beano.

After doing National Service in the RAF, he was hired by the Lancashire Evening Post to draw sports cartoons and advertisements. In 1952 he began working freelance for DC Thomson's The Beano, creating "Little Plum" (1953), "Minnie the Minx" (1953), "When the Bell Rings" (1954), later renamed "The Bash Street Kids", and "The Three Bears". He also created "The Banana Bunch" for The Beezer in 1956. He left The Beano in 1962 after a disagreement with the editor, and stopped working for DC Thomson entirely in 1964.

That year Baxendale and Ken Reid created Wham! for Odhams Press, for which Baxendale drew "Eagle Eye, Junior Spy", "Grimly Feendish", "General Nitt and his Barmy Army" and "George's Germs". For Wham!'s sister paper Smash! he created "Bad Penny", "Dr Doom", "The Swots and the Blots", "Sam's Spook" and "The Man from BUNGLE". Unlike at Thomson, Odhams allowed Baxendale to sign his strips.

From 1966 to 1975 he worked for Odhams' parent company IPC, anonymously once again. He mainly drew for Buster, for which he created "Clever Dick", "Nellyphant", "The Pirates", "The Cave Kids", "The Nits of the Round Table", "Mervyn's Monsters" and "Big Chief Pow Wow". He also created "Sweeny Toddler" and "Match of the Week" for Shiver and Shake, "Bluebottle and Basher" for Valiant, "Champ" for Whizzer and Chips, "Badtime Bedtime Books" for Monster Fun, and "The Lion Lot" for Lion.

In 1975 Baxendale created Willy the Kid in a series of three hardback annuals from Gerald Duckworth and Company, for which he was given full credit and retained copyright ownership. In the 1980s he fought a seven-year legal battle with DC Thomson over ownership of the characters he had created for them, which was settled out of court in 1987. On his website he asserts his authorship of "The Bash Street Kids", "Minnie the Minx", "Little Plum", "The Three Bears", and "The Banana Bunch", in accordance with the Copyright, Designs and Patents Act 1988.

Also in 1987, he created THRRP!, a collection of comic strips for adults, for Knockabout, and founded his own publishing company, Reaper Books. In 1990 he created I Love You Baby Basil for The Guardian, which ran for two years.

His style became looser and more open as his career went on, and was a strong influence on Tom Paterson (whose "Calamity James" in The Beano could be mistaken for a later Baxendale strip) and his own son Martin. 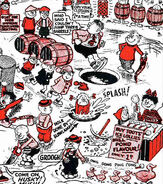