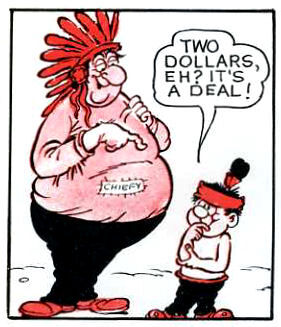 Little Plum (full title Little Plum, Your Redskin Chum) is a comic strip from The Beano that first appeared in 1953. It was first drawn by Leo Baxendale.

Leo Baxendale was inspired to create the strip after seeing Davey Law's Dennis the Menace and deciding to come up with a similar character himself; seeing a Disney comic with Hiawatha in it, Baxendale hit on the idea of creating an Indian Dennis the Menace. He sent a drawing of his character to Beano editor George Moonie and it was accepted.[1]

Baxendale stated decades later that he vaguely remembered calling the character either "Big Chief Peanut" or "Little Chief Peanut"; he was given the provisional name of Booster by the publisher before finally being christened as Little Plum by the time he made his debut in 1953. To Baxendale's puzzlement, the printed versions of his strips always left Plum's nose white instead of pink. "To me he always looked as if he had gangrene in his nose", said Baxendale.[2]

Plum may have been conceived as an Indian version of Dennis the Menace, but he ended up as a rather different character. Where Dennis was always a deliberate troublemaker, any menacing caused by Plum was often unintentional - in the 9 November 1957 strip his feather headband flies off in the wind and tickles a weight-lifting Chiefy, leading to a nasty mishap. Plum switches to a sombrero, but this too causes trouble - it fills up with rainwater, leading to another accident when plum doffs it to Chiefy. In the 1 March 1958 strip Plum builds a tea-making robot for Chiefy that malfunctions badly, assaulting the chief and eventually drinking the cuppa itself.

The fact that the characters drink tea in the morning, incidentally, locates the strip in the same strange world as Desperate Dan, the world where the stereotypes of Westerns (where Indians pepper their sentences with "um" and spend their day-to-day lives with feathers in their hair) collide head-on with what is unmistakably contemporary Britain.