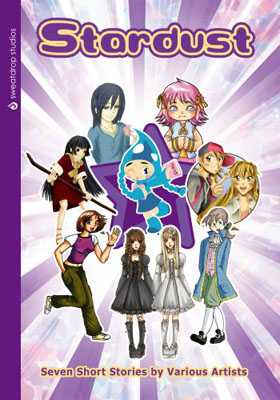 Stardust is a 2006 anthology published by Sweatdrop Studios. It consists of seven stories that were created for Tokyopop's Rising Stars of Manga United Kingdom and Ireland contest, but which didn't get far enough to make it into the contest's official tie-in book. As such, Stardust is unusual amongst Sweatdrop anthologies in that the stories are linked by origin, rather than subject.

In imitation of the official Rising Stars of Manga books, each story is prefaced by a critical overview provided by another Sweatdrop member.

Retrieved from "https://ukcomics.fandom.com/wiki/Stardust?oldid=12425"
Community content is available under CC-BY-SA unless otherwise noted.