By 1922/23 he had his own annual which continued through until 1951 with a few gaps during the war years. There was also an Oojah comic strip and between 1921 and 1929 an Oojah supplement in The Daily Sketch, initially running to four pages each Saturday. Oojah was revived in the Jack and Jill Annuals in the 1950s but bore little relation to the original character of the early 1920s and played second fiddle to his nephew, Jerry.

The stories were written for over 30 years by Flo Lancaster. They were illustrated by Thomas Maybank until his death in 1929. H.M.Tallintyre took over as illustrator from then on.

The stories in the early twenties are exciting, surreal and highly imaginative. By the thirites they had become somewhat tame and predictable but still good fun. The series did seem to improve again from the 1937 annual onwards. There was also a Daily Sketch Birthday Club of which Uncle Oojah was honorary chairman. There were real benefits to members including vouchers for a pound of chocolates and some great badges and postcards.

Uncle Oojah (known at this time as Flip Flap the Great Oojah) makes his first ever appearance. 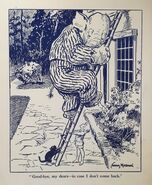 From 'Oojah House, The Story of Flip Flap's Little Mansion' 1921

From 'Oojah House, The Story of Flips Flap's Little Mansion 1921'

'The Princess of Persia' from the 'Uncle Oojah's Travels' series, published around 1938 but probably written and drawn in the early 1920s

The first ever Oojah Annual from 1923

Obtaining decent copies of any Oojah publication is difficult. The annuals, especially those from the later twenties to 1936 were printed on low quality paper and were full of activities and colouring poages which were meant to be cut out and coloured in. There are some good copies out there and they are well worth pursuing but the value is likely to go up steeply as we approach Oojah's one hundredth birthday in February 2019. Check out facebook page @uncle oojah and website www.uncleoojah.com for more information and updates.