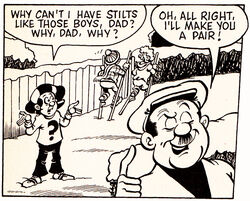 "Why, Dad, Why? was a strip that ran in Whizzer and Chips in t1970-72, drawn by Manny Curtis, and, in September 1978, was revived in Cheeky Weekly; it remained there until the final issue in February 1980.

The strip revolved around a boy who was always asking questions ("Why do people say it rains pennies from heaven?", "why cant I have a rubber 'kangaroo' like that boy?") much to the annoyance of his long-suffering father.